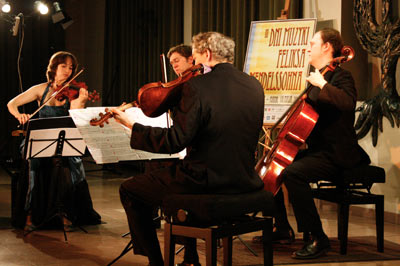 The Felix Mendelssohn Music Days took place for the third time in Krakow this May, this year in the Centre for Jewish Culture on Meiselsa Street. While highlighting the works of German-Jewish composer Mendelssohn-Bartoldy (each of the eight concerts featured at least one of his pieces), the festival also included works by Mozart, Schubert, Brahms, Beethoven and a handful of other great composers, primarily of the Romantic period. Performing the pieces were a vast array of musicians from all over the world: Germany, Poland, the US, Italy, France, Slovenia, Russia, Slovakia, Austria, Canada, and Spain.

I was lucky enough to catch a performance on the final evening of the festival, where the Spanish string quartet Cuartero Casals performed works by Haydn, Beethoven, and of course Mendelssohn. The quartet, in existence since 1988, is composed of Vera Martinez Mehner on violin, Abel Tomas on violin, Jonathan Brown on viola, and Arnau Tomas on cello, and has won top prizes at several international competitions.

I must admit, it had been far too long since I had last been to a chamber music concert, and hearing such skilled musicians perform these moving pieces was a delight to the ears. The programme began with a flowing rendition of Haydn’s String Quartet in D major Op. 33 No. 6 Hob. III/42. Next, Mendelssohn’s String Quartet No. 2 in A minor Op. 13 began as a tempestuous opposition to the calmer Haydn before it, reaching a climax as the musician?s bodies moved violently with the force of the music. In the second movement, however, Mendelssohn’s vigour turned towards the creation of flowing harmonies, though those violent tendencies were always hiding just beneath the surface in his music. Finally, one of Mendelssohn’s major influences, Beethoven, was presented superbly in all of his detailed nuances by the quartet as they performed the String Quartet in C major Op. 59 No. 3.

If the aim of the festival is to promote chamber music in general, and to bring one of its most talented composers to a wider audience, then it is certainly growing more successful with each passing year. Canadian cellist Jeremy Findlay and his wife, pianist Elena Braslavsky, are the music directors of the festival and both one-time residents of Krakow. Mr. Findlay promised that the fourth edition of the festival, scheduled for the 8th through to the 14th May 2009, will be an even bigger event, as it coincides with the 200th birthday of the renowned composer. I, for one, am very much looking forward to it.