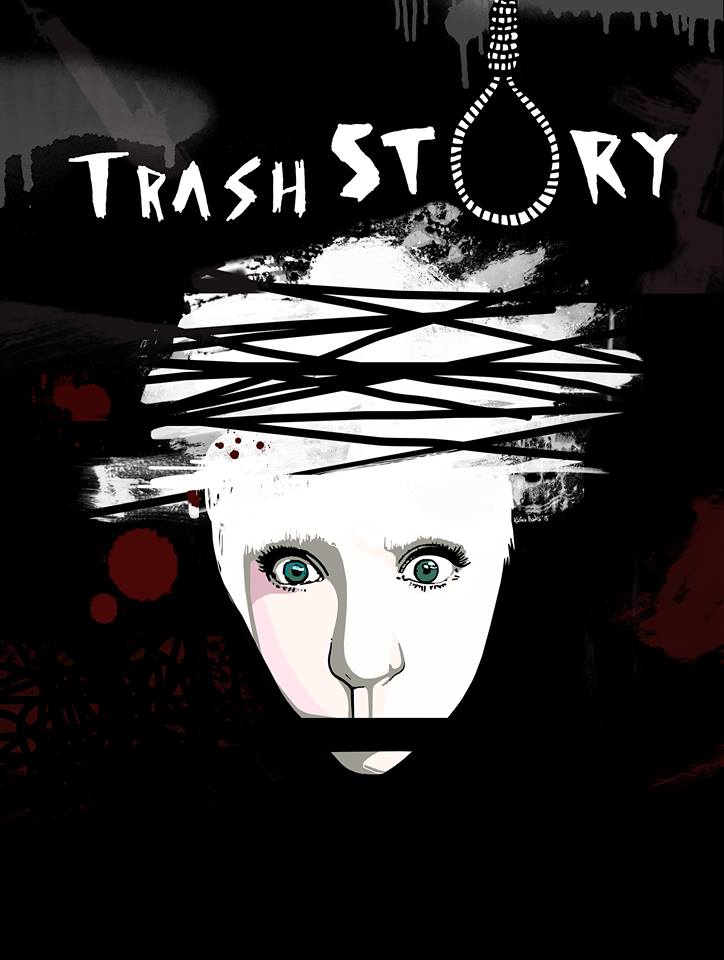 A reluctant Polish soldier (played by Marcus Lorenzo) awaiting redeployment to the Middle East in the aftermath of the 9/11 attacks drinks himself to a stupor and wanders into the night into in an unnamed river in the former eastern territories of Germany that ultimately became part of Poland. A child named Ursula (played by Melessie Clark, Amanda Lee Hawkins, and Malena Ramirez) live through the rise and fall of Nazism up to the point when Russian troops close in.

Young adult Tiny (Alex Walton) struggles with his upcoming conscription into mandatory military service as he thinks about his missing in action brother while his broken family deals with the ubiquitous and tragic presence of war in their lives. In the meantime, other characters living through different perspectives—including a Polish doctor forced to participate in Nazi experiments—attempt to explain their feelings from their own points of view.

In a nutshell this is the premise of Warsaw-based Magda Fertacz’s Trash Story (translated by Benjamin Paloff), which made its New York premiere between December 3 and 13. I attended the final performance in the company of friends of many backgrounds, and compared to a handful of videos of productions of this play I have seen online, this one is focused more on the actors’ performance than looks, so props were limited to a few chairs, lights, and the music of Polish experimental musician Zenial, who added dramatic texture to the 90-minute one-act play.

“Two years ago I saw a reading of contemporary Polish plays done at the New York Theater Workshop and Trash Story really stood out for me,” explains producer Tomasz Smolarski. “It is written very well and tells a compelling story, and it tells it in a non-linear fashion mixing dreams and reality which appealed to me a lot. “

Under the direction of Monica Payne (who also helmed a UCLA adaptation earlier this year), a diverse cast brought the audience a compact but complex history of wartime Poland spanning a period of almost eight decades, including an account one of the author’s own relatives garnered from her extensive research into her own family history during a recent visit to Auschwitz.

As writer Fertacz wrote over an e-mail interview, “I found a testimony my aunt told after the camp’s liberation. Medical experiments were conducted on her in Auschwitz and she asked a Polish doctor who worked there for death many times. She survived the camp and came back with my uncle, who she met over there. They stayed together for the rest of their lives, but she never told us her story. Secrets that need to be revealed are a main subject in Trash Story. On the play, my family’s story is told from the perspective of the doctor.”

The story is filled with conflicts. The most poignant of them is how Tiny deals with his absent father (Curtis James Nielsen), who fled to New York as the family crisis unfolded, his own unrequited romantic feelings towards his attractive sister-in-law (Anna Podolak, the sole Polish-born member of the cast) and his unwillingness to join Poland’s mandatory military service in the light of what happened to his own brother.

There were several departures from previous productions—one of them being that the character of Ursula was deliberately split into three different actresses, one Caucasian (Amanda Lee Hawkins), one black (Melessie Clark) and one Hispanic (Malena Ramirez). According to producer Tomasz Smolarski, this was intended to reflect the play’s universal appeal. “We felt that by dividing a role of Ursula into three different actresses, we achieved that,” he explains. “Also, living in such a diverse place like New York, we had the opportunity to work with talents coming from different backgrounds and acting sensibilities, which greatly added to our production.”

There is also an extremely strong anti-militaristic feeling that permeates most of the play, both directly and indirectly. “War always brings the suffering to everyone,” said Smolarski. “I am a pacifist, and the anti-war message of the play resonated with me very strongly. I didn’t want to serve in the army, but in my times it was enough to enlist at the university to avoid the service. Thankfully there is no mandatory military service in Poland anymore.”

“When I was writing the play, Polish soldiers went for the military mission to Iraq,” said Fertacz. “It was a very hot subject then. But now you can interchange it with Afghanistan and you will get the same story. In Trash Story the narration of Ursula is only one of the points of view. It is a perspective of a small girl. The whole play is written from the perspective of women from different generations.”

I believe all the players on this production did an amazing job on this play with the resources they had for this run. Trash Story deserves a full-budget production that will bring a much broader audience to really get the message out: war is hell when war is in your own home.