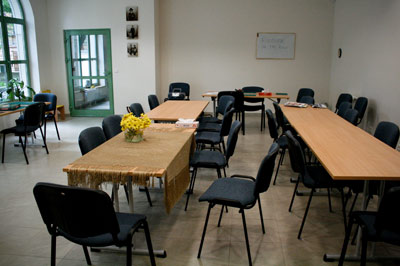 It’s been almost one month since I last visited the brand-new Jewish Community Centre on Miodowa Street, though at that time the atmosphere was completely different. As we reported in last month’s Krakow Post, the centre opened with a grand ceremony, which included a momentous visit by Prince Charles and Camilla, as well as many other important figures, and a throng of reporters and photographers.

I returned nearly a month later to have a much quieter talk with Jonathan Ornstein, the centre’s director, and to see what’s going on at the centre now that the commotion from the opening has settled.

KP: It’s been one month since the opening – what have you accomplished so far, and what’s still in the works?

JO: Considering that the opening was very much dictated by the Prince’s schedule – I think we would have wanted the opening to be probably six months down the road – considering that, and the building not being completely ready, even without all of these things we’ve managed to be remarkably functional. The Klub Seniora, the senior’s club, is up and functioning three days a week; we have the Sunday school functioning, we’ve had the Days of Israel, [during which] we held a lot of events here, we had a Shabat dinner here – somehow – for 120 people. We?ve had different lectures; a world expert on anti-Semitism is coming this week. The Rabbi has been having Talmud lessons and Bar mitzvah lessons. So we’ve been surprisingly functional even though the infrastructure of the building isn’t in place yet.

KP: What has been the response so far from the local Jewish community?

JO: Very positive; people are quite excited. Obviously with the Prince coming there was a lot of focus on it, people participated in the event and saw how much interest there was from outside the community. And now it’s a question of settling in, finding a use for the building. The idea of a JCC is something that in many countries like the States is obvious, but here it’s a new concept. The idea that this sort of centre is not just a collection of offices but a place for the community to gather and to be together and to interact with each other, and also with Jews from around the world, is a new concept and we’re trying to educate people about that now.

KP: Have people been coming on their own to see what it’s about?

JO: Yes, it’s been interesting. I always have to keep an eye on the gates because people just wander in, [saying] “Oh I read about it in the press, in London…” They come and want to take a look around. We’ll have to deal with this because a normal JCC is a centre for the community, and you don’t really have to deal with tourism or something like this. But here, it’s on the map – you go to the Tempel Synagogue, you go to the Galicia Museum, you go to the JCC ? so we’re trying to figure out exactly how to manage the interaction between tourists and the local community. We have to figure out something because now every day about 40-50 people just wander into the building.

KP: I know the Jewish Culture Festival is coming up, is there going to be anything hosted at the JCC that’s part of that?

JO: We’re participating with the festival, which is very exciting for us because obviously it’s a very big deal, here in Krakow and internationally. There will be a few lectures; there will be a symposium with some Polish psychiatrists, Professors Orvid and Aleksanderowicz, an Israeli crime writer whose book is being published in Poland. I’ll do a presentation about the building. And we’re letting the building be used here and there as much as it can help the festival.

KP: When do you see all the furniture and infrastructure being in place?

JO: We’re getting a handle on it now. It should be fully up and functioning after the summer, once the academic year starts again and people are back from vacation. It’s slowly coming together.