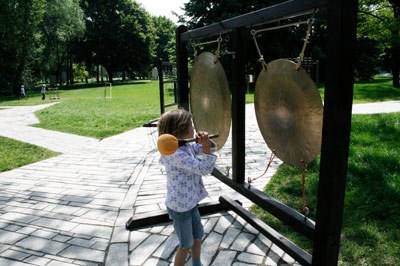 June 1st is Children’s Day in Poland and this year Cracovian youngsters were given a princely present. “Ogrod Doswiadczen” (“The Garden of Experiments”) had its official opening on the 8th of May and is now fully open to the public.

Spread across six hectares of landscaped parkland between old Krakow and Nowa Huta, the garden has swept science out of the dusty classroom. Visitors can literally grasp the doctrine, as over fifty interactive installations are up and running, each demonstrating a different phenomenon in the world of physics.

The brainchild of Danuta Szymonska, head of the Cyprian Norwid Cultural Centre, the garden was jointly funded by Krakow and EU money and it has already scooped a prize in this year’s “Poland Blossoms – Seven Wonders of EU Funding” competition, winning in the tourist attraction category.

Several luminaries lent their expertise to the project, including architect Krzysztof Ingarden, physicist Dr. Marek Golab and engineer Krzysztof Stepien. After gaining the blessing of the late author’s family, the garden was dedicated to Stanislaw Lem, the internationally celebrated science fiction writer who lived in Krakow for many decades.

The idea for the garden was initially sparked by a visit to Nuremberg’s “Field of Experiences for the Senses.” Mrs Szymonska was especially keen to found the garden in the vicinity of Nowa Huta, a district so often maligned by Cracovians. The big break came in late 2004, when the project gained a boost through EU backing.

One of the most striking aspects of the garden is its sculptural quality. Great care has been taken to organise the installations – themselves visually delightful – in a manner that is coherent, emblematic and aesthetically pleasing. The layout was masterminded by Krzysztof Ingarden, best known to Cracovians as the architect of the Wyspianski 2000 pavilion.

The installations have been divided into four zones: Optical, Acoustic, Liquid and Mechanical. Each quarter unfurls like a bough of a tree, in this case weaving amongst actual mature trees that have endured from the former parkland. Platforms, inspired by the notion of fallen leaves – thus reflecting the laws of physics – provide elegant bases for each experiment. Prisms, periscopes, tubular bells and rotating stars are a few of the many installations that visitors can enjoy.

Stanislaw Lem, whose widow attended the opening ceremony on May 8th, would have had much to savour. As a child, the future literary giant filled countless notebooks with designs for machines and contraptions. Until his last days, his favourite keepsake was a light conductor, which held pride of place on his desk at his Krakow home.

By a typical twist of eastern fate, Lem was taught mathematics as a schoolboy in Lwow (today Lviv, Ukraine) by
Mr. Ingarden’s grandfather, the distinguished philosopher Roman Ingarden. Krzysztof Ingarden will continue to cooperate with The Garden of Experiments, which is a work in progress. A pavilion and a pond are in the pipeline, and numerous events are planned.

Anna Krochmal, director of the garden, is brimming with ideas for the enterprise, citing a bookshop, a café, not to mention a general expansion across more hectares of parkland: “The garden is especially magical at night, when the lights shine up through the trees,” she says. “We are even planning yoga and Milonga dances – the possibilities are endless!”

Thus far, children have wasted no time in getting to grips with the garden?s gleaming installations. Youngsters have carte blanche to bang on gongs, jump on trampolines and dangle from telegraphs. And if one of the experiments is broken by an over-enthusiastic pair of hands, it can be confidently assumed that one man would not be in the least bit troubled – Stanislaw Lem. Indeed, some of the funniest passages in Lem’s memoir are his descriptions of the fates of his childhood toys, most of which he smashed to smithereens with great relish.