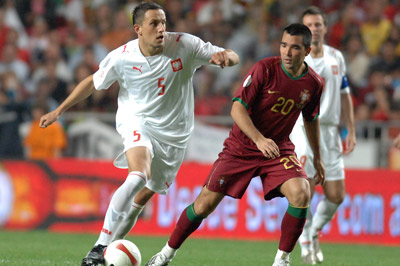 The road to the Euro 2008 appears to be a rocky one for the Polish national football squad, who are about to make their debut on this football platform. A lot of happenings that took place over the last couple of months have made the enthusiastic Polish football fans a bit more sceptical, compared to last autumn, when Poland clinched their nomination after a 2-0 win against Belgium. Poland won their qualification group, beating tough competition from Serbia, Finland and Portugal.

Poland’s focus on getting prepared for their maiden match at EURO 2008 went off track when it became apparent a lot of the country’s football officials were involved in the largest football scandal the country has seen since the downfall of communism in 1989. Match fixing took place amongst club presidents, referees, officials of the football governing body of Poland (PZPN), which was apparently aware of the situation without taking action against it, and about 30 teams.

Although the scandal is not directly linked to the players in the national squad, Poland’s head coach Leo Beenhakker immediately organised a press conference on April 16th to express his deep concern about the situation and the possible impact it could have on his team while preparing for the Euro 2008 tournament, and to his own position as head coach of Poland. Beenhakker displayed a sophisticated hint of solidarity with PZPN president Michal Listkiewicz, who announced his resignation as a consequence of the football scandal taking place under his responsibility. Ever since, it is believed that Beenhakker might not last long enough as head coach of Poland to see the qualifications for World Cup 2010 starting this September.

Another reason for the press conference was to prevent a further drop of morale, after having suffered a humiliating 3-0 defeat in a friendly match against the USA in late March. And things have not got any better since: Poland?s first real preparation game for the Euro 2008 was on Friday May 23rd against the very modest FC Schaffhausen from the Swiss 2nd league. Jacek Krzynowek saved the day by scoring the only goal, but it must have worried Beenhakker to see Poland struggle against such a small team, while more serious opposition awaits.

In particular the last preparation game against Denmark (on June 1st) will be a good measure to see where Poland stands: together with Germany, Denmark historically is Poland?s toughest opponent, suffering their biggest defeat ever (8-0, back in 1948) and in modern history (5-1, in 2004) against this side.

Maybe of a lesser impact than Spanish head coach Aragones leaving Real Madrid star Raul out of the Spanish squad, Beenhakker decided to not even consider Polish football icon Jerzy Dudek in his preliminary selection. Both presumed stand-in goalies Lukasz Fabianski (Arsenal) and Tomasz Kuszczak (Manchester United) have played far fewer official games than Dudek did at Real Madrid this season, which makes the decision remarkable, since the squad lacks real international experience.

Beenhakker’s search for a creative midfielder resulted in Brazilian-born Roger from Legia, who (against Poland’s procedures) received Polish citizenship on April 17th, having been in Poland only three years, rather than the minimum required five. The Brazilian, now controversially turned Polish, is part of the 25 men large preliminary squad. Every team is allowed to bring 20 field players and three goalkeepers to Euro 2008.

Solid on paper, weak in practise

Despite all controversy, Poland will still be able to present an impressive force on the pitch, in particular the highly regarded Celtic goalie Artur Boruc and the talented Ebi Smolarek, who got his first chance in professional football under Leo Beenhakker while both were active for Dutch club Feyenoord, back in 2000.

However, the question remains how Poland will perform. Poland has never before qualified for the Euro main tournament, and during the last two editions of the World Cup for which they did qualify, they never passed the group stages, having won only one out of three games per tournament.

Also from a statistical point of view, the odds are against the Poles. Germany is one of the top favourites and Austria is one of the hosting countries. Poland has never won a match against the Germans, or an organising country of a big tournament for that matter. Slight hope can be drawn from good and unbeaten records against Croatia and Austria over the past years.

Leo Beenhakker has said to aim for the quarter finals: very ambitious for a national team that hasn?t played any matches in advanced rounds on major tournaments since 1986. But these are all statistics from Poland?s World Cup history. When it comes to Euro, Poland still has a blank sheet. Experience shows that teams with difficult or no preparation often perform well on the main Euro event: ill prepared Netherlands (1988), Denmark (1992) and Greece (2004) even took the trophy home. So maybe the rocky road that Beenhakker and his Polish men are on is the right way to success after all.

The UEFA Euro 2008 football European Championships will be held from June 7 – June 29 2008 in eight cities across Switzerland and Austria. Poland will play June 8 (vs. Germany), June 12 (vs. Croatia) and June 16 (vs. Austria). The final will be played in Vienna on June 29th. All matches can be viewed in Poland via Polsat and Polsat Sport. For more information about the participating teams, the players and the rosters, please visit the tournament’s official website: www.euro2008.uefa.com