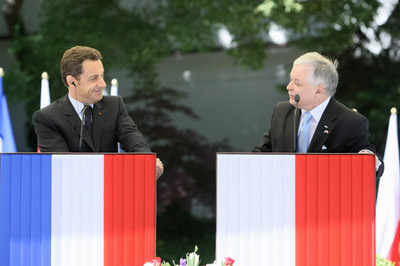 Confirming their co-operation, French President Nicolas Sarkozy and his Polish counterpart Lech Kaczynski signed a declaration on strategic partnership at the second Polish-French summit, held in Warsaw on the 28th of May.

The document, covering issues regarding energy, education and security, obliges the two countries to collaborate closely on political, economic, social and cultural affairs both in bilateral relations and in discussions with the EU and NATO. More importantly, the newly signed agreement signifies that Poland and France have reconciled after the negativity that arose under former President Jacques Chirac, partly due to differences over the US-led invasion of Iraq.

In addition, Sarkozy announced that Paris will lift restrictions on Polish workers in France as of July 1st this year, the same day on which the country is to take over the half-yearly EU presidency. “It’s a very important decision,” said Kaczynski. “We want to be a fully-fledged member of the EU.”

Unlike Britain, Ireland and Sweden, which chose to allow complete access upon enlargement, France preferred to keep its labour market closed to new EU members until they had undergone a five-year transition period. Considering France originally planned to take this step in May 2009, the restrictions are to be abolished nearly a year ahead of schedule.

As a result, the French labour market will soon be open to all workers from the eight former communist countries that joined the EU in 2004. Citizens of Poland, Slovakia, Hungary, Latvia, Lithuania, Estonia, Slovenia and the Czech Republic will be able to work freely in France, regardless of their profession. However, restrictions will continue to apply to workers from Bulgaria and Romania, which joined the EU only last year. Furthermore, work restrictions still remain in force in Germany, Austria, Denmark and Belgium.

Sarkozy emphasised that he believes in the free movement of people and goods inside Europe and declared France wants to work “side by side” with Poland during its entire presidency of the EU. As the largest of the eight countries involved, Poland cut its unemployment rate to 9 per cent, demonstrating high economic growth and “the ambition to develop in a sustained way.” Accordingly, Sarkozy said France should approach Poland with understanding.

The news was also well received by the European Commission. Vladimir Spidla, European Commissioner for Employment, Social Affairs and Equal Opportunities, said, “I warmly welcome the fact that the French government has reconsidered the restrictions on free movement of workers in force since May 2004.” According to Spidla, “Fully opening the job market to citizens of the eight member states from Central and Eastern Europe will bring benefits to the economy and to the country as a whole.”

The EC report on the functioning of transitional measures from February 2006 shows that, over the first two years following the expansion, migration flows have had positive economic effects in those countries that did not restrict free movement from the eight new Member States. For instance, they helped to relieve labour market shortages and contributed to sustained economic growth and to better public finances in the countries concerned.

For France, which suffers a shortage of skilled labour despite its relatively high 7.5 percent unemployment rate, migration from Eastern Europe is seen as part of the solution, especially seeing as the country has been gradually opening its job market to workers from the east since May 2006.

During his one-day visit, the French president also met with Prime Minister Donald Tusk to talk over the Polish initiative on the EU foreign policy and further eastern expansion, toward the former Soviet republics, notably Ukraine, Georgia and Azerbaijan. In the case of Ukraine, Poland has been a strong supporter of its establishing closer ties with both the EU and NATO. Sarkozy said France will also seek closer links between the EU and Ukraine.

Tusk responded warmly to the encouraging words expressed by Sarkozy, saying it showed that eastern partnership with Ukraine could soon be approved and it should not be seen as a rival to plans championed by Sarkozy to boost EU-Mediterranean ties. “There is no conflict between these two projects, they are complementary,” Tusk said.

Finally, Sarkozy congratulated Poland on its decision to take part in the EU military mission in Chad, stressing that the move exemplifies the engagement of Poland in shared political processes as well as a commitment to the security of the EU. Following meetings with Sejm Speaker Bronislaw Komorowski and Senate Speaker Bogdan Borusewicz, Sarkozy delivered a speech to the parliament, in which he acclaimed Poland as a great nation of Europe.