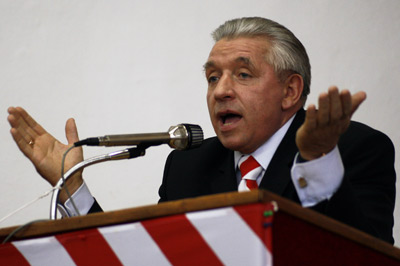 While the journalists wait on the outside, inside the trial of Samoobrona (Self-Defence) party leader Andzej Lepper and former deputy Stanislaw Lyzwinski continues in the circular court in Piotrkow. Since May 6th both men stand on trial for soliciting sexual favours from females employed in the party office.

Lepper was charged in November 2007 for exploiting his public position as a Samoobrona leader to force Aneta Krawczyk, a former Samoobrona employee, into sexual relations with the promise of employment. The charges were brought against him after Lepper lost the parliamentary elections and also lost his immunity to prosecutions. The events in question allegedly took place in 2001-2002. If charged, Lepper faces a maximum of eight years in prison.

Lyzwinski faces even more serious charges; if convicted he will face up to 10 years in prison. He is accused of demanding and accepting sexual favors from four women, and rape. He is also accused of harassment and threatening that denial of sexual favors would lead to the dismissal of the women from their positions and the party.

The so-called ?Samoobrona sex scandal? or ?sex-gate? began in December 2006 after the publication of an investigative reporting piece appearing in Gazeta Wyborcza. The article, based on the testimony of Aneta Krawczyk, claimed that she was hired as the director in the Lodz office of the Samoobrona party after performing sexual favours. When journalist Marcin Kaci interviewed Krawczyk, she decided to tell him about the hiring process, which was featured in the original article.

Prior to the commencement of the trial, both men denied the charges. At the time of the accusations and original publication of Gazeta Wyborcza, Lepper stated that this was no more than a political witch-hunt.

The scandal has received much publicity, however the trial is closed to the media at the request of Krawczyk?s attorney, Agata Kalinska-Moc, who told the Polish Press Agency (PAP) that it was to protect her client, who wanted to avoid media attention. Pawel Hochman, the chairman of the court, also explained to Dziennk that the addressed topics could be so drastic that they will be inappropriate for direct media coverage.

Needless to say, the highly controversial affair could put an end to the political careers of both accused men.