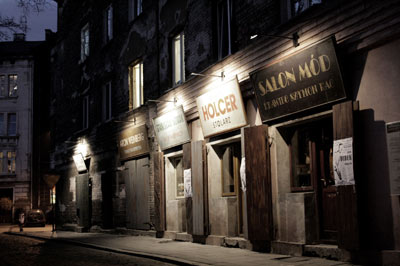 Before the devastation of the Second World War, Kazimierz housed a flourishing Jewish community in a newly independent Poland, and the district was home to a large fraction of Krakow’s estimated 65,000 Jews. It was a historic centre of Jewish culture in southern Poland. However, after the events of the Holocaust decimated Krakow’s Jewish population and scattered the survivors around the globe, the uninhabited district fell into neglect and disrepair for the best part of fifty years.
Today, the word on Kazimierz’s streets is “revival” – but is it possible to have a true Jewish revival with so few actual Jews living in Kazimierz? Has the neighbourhood simply become a sort of Jewish Disneyland, catering to tourists who dream of a romantic Jewish past, but lacking any present-day cultural reality? Or have recent events like the opening of the Jewish Community Centre and the popularity of the Jewish Culture Festival shown that there is some true Jewish life amidst the memorabilia?

AGAINST:
“It’s terrible to have all these Jewish hotels, restaurants and trinkets in Kazimierz when this is where they were all massacred, and when so few Jews actually live here now.”
Just because something is repeated a hundred times, it does not mean it is necessarily untrue. But it does make the idea strangely suspect; if every tourist notices the same thing at a first glance, then surely there must be some complexity going unnoticed, some false bottom to the situation? Bearing in mind, of course, that tourists are not a species of people celebrated for their perceptiveness and intellectual prowess.

Three years ago, or especially seven years ago, I could have made an unorthodox case for the survival of a true Jewish culture in Kazimierz, in spite of the almost total formal absence of Jews, so to speak. This culture was understood in a symbolic sense. That is, crossing Dietla one entered a small zone that was a cultural, and sometimes even legislative alternative to Krakow-at-large. A different kind of nightlife took place here; the mixture of homeless people, drug addicts, students and Bohemia, combined with the unrenovated buildings and badly functioning streetlamps made for an ambience of creative depravity. The first Soup Festival gave the impression that things were barely under control, and that things could fly off their hinges at any moment.

By this I am not trying to suggest that there was anything particularly Jewish about Kazimierz, but that it was regarded as an “other” to the mainstream of Krakow’s Old Town, and therefore an ?other? to the homogenous Polish Catholic lifestyle and value system.

The most compelling instances of this were when, for example, the (previous) Pope visited Krakow, and all the alcohol shops were shut down in the city for his arrival, to prepare a properly pious atmosphere. During these times the bars and alcohol shops of Kazimierz remained outside of the city-wide jurisdiction – that is, they were enough part of another culture that they were somehow outside the moral regulations of the rest of Krakow.

And so, for three days, all of Krakow drank in Kazimierz.
It?s a bit feeble, that it boils down to alcohol like this; but it was a legacy of sorts.

But I started off this text by saying that three years ago – more or less to the moment when Poland entered the European Union – I could have made a case for the living presence of Jewishness in Kazimierz, however for the past three years the story of Kazimierz has been primarily one of gentrification (the Prince of Wales’s bizarre input notwithstanding). The steady and cynical development of a “Kazimierz look” for the cafes, the ban on public drinking, and the over-development, piling bars upon bars, have all helped make Kazimierz an “ordinary” part of Krakow, albeit with a fashionable reputation.

After the events of World War II, it is hardly surprising that those few Jews who did manage to escape Poland and the Holocaust (around ten percent) haven’t been in a hurry to return. Memories too horrid for most of us to comprehend are indelibly printed on the collective consciousness of an older generation, whilst younger generations of Jews may feel no connection with a land which they never stepped foot in – and one which offers less opportunities than many enjoy in America, Canada, Israel, Britain and Australia today.

Such a a reality means that Kazimierz will never flourish as a Jewish district in the same sense that it did for six hundred years prior to the war, but it does have a chance to develop sensitively in response to its past, to cultivate Jewish culture, and to serve the needs of the small but growing Jewish community. I would argue it is already doing that, thanks to a small but committed number of Jews and Philosemites (including Prince Charles) who have invested time, effort and money in the district, either for cultural, community or business goals. Chris Schwarz’s Galicia Museum, the Jewish Cultural Centre and now the Jewish Community Centre are obvious examples of the former two, whilst a number of kosher restaurants such as Ariel, Alef and Once Upon a Time in Kazimierz also undeniably contribute to a sense of Jewishness of the district, whether they are patronized by tourists or – anyone else.

You?d have to be quite blind not to detect a sense of Jewishness in Kazimierz (those synagogues certainly help), but what about a revival? It’s a sad and oft-stated truth that there aren’t enough Jews living in Krakow to support a revival of Jewish culture by themselves, but the beautiful paradox of the current situation is that one is happening anyway. In fact both Cracovians and tourists can be proud that they are actually providing the interest, and therefore impetus, for a revival in Jewish culture, whether they have any Jewish ties or not. This revival isn’t imagined, but can be measured by the increasing attendance numbers of the Jewish Festival (the final concert attracted 13,000 people in 2007), the popular Klezmer concerts that now play in the district’s bars every week and the need of a community centre for the growing population. Meanwhile the interest in Jewish culture amongst young Poles is such that the Department of Jewish Studies at Jagiellonian University is now oversubscribed. You couldn?t have said that ten years ago.

A Jewish revival can only ever be a small part of the development of Kazimierz. Ultimately the area must develop, along with the rest of the world, according to the rules of economics. But rather than sweep Jewish culture under the carpet, let?s be thankful that this integral part of Krakow?s history is being preserved, cultivated and celebrated by today’s generation.