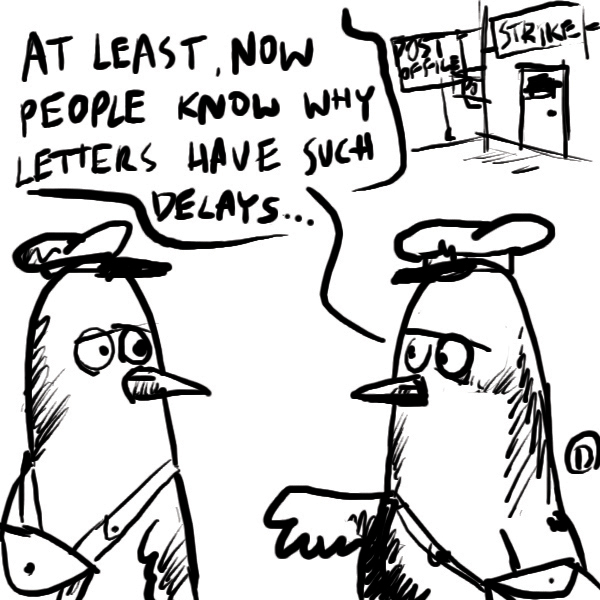 The state-owned postal services company, Poczta Polska, is undergoing a difficult battle with its trade unions as a result of being unable to provide the salary raise insisted on by its employees. Consequently, members of the NSZZ Solidarity trade union have been threatening to go on strike.

Postal workers are demanding an extra 700 zloty to their monthly wages, but Poczta management only agrees to 500 zloty, which would still lead to a 270 million zloty deficit at the end of the year. Public sector employees persist, motivated by success stories of groups that have obtained pay rises from the state. To make up for the cost of rewarding its 105,000 employees, the company would have to impose higher rates for its services.

In search of ways to offset losses, Poczta Polska has applied for permission from the Office of Electronic Communication (UKE) to increase service rates. The new price list currently under review by UKE proposes a price increase of up to 0.10 zloty. Price changes are to be introduced in July 2008. Though this would lead to an extra 80 million zloty in earnings, it is still not sufficient to cover the huge shortfall.

According to Poczta Polska director-general Andrzej Polakowski, the enterprise could finance itself without the help of the government budget if it employed no more than 85,000 workers, meaning it would need to restructure by laying off 20 percent of its staff. However, an agreement concluded in 2005 prevents any dismissals until the end of this year. In addition, according to Puls Dnia, the company has many ties to union organisations that strongly block any attempts at reform.

The strike was initially set for April 21st to coincide with the tax season, and then rescheduled for May 5th to avoid conflict with customers. In addition to delaying posted tax returns, the original date would have caused problems with the mailing of junior high test papers. While Poczta Polska may have succeeded in temporarily holding on to public support, failure to meet the demands of its workers by May 5th threatens to bring serious consequences.

Even though the national postal service retains a monopoly on the handling of letters weighing less than 50 grams, which makes up 70 percent of all mail, the market in which it operates is filled with opportunistic competitors. Some have even gone as far as working around the law by adding special weight bars to make regular mail heavier.

Parliament is finishing work on legislation that would make Poczta Polska self-funding, fundamentally altering its current status as a public enterprise whose losses are automatically covered by the government. Of course, such changes will ultimately require the signature of the president, though it?s really not certain when privatisation will take place.

The first strong instigator that led to the rise of alternative operators was the strike held by postal delivery workers at the end of 2006. Today, close to 200 private couriers, including TNT, DHL and new local businesses such as InPost from Krakow, are aggressively claiming more and more orders from customers, mainly large firms, who value the additional safety margin these companies guarantee.

InPost, for instance, has kept itself well prepared in case Poczta Polska were to go on strike. According to chairman Rafal Brzoska, InPost alone has signed contracts with large players in the telecommunication and energy market, adding up to 20 million zloty.

Currently delivering close to 2.5 million pieces per year, InPost expects its business to triple as an increasing number of people switch over from the public service.

Despite the success of private couriers and the significant need for Poczta Polska to be restructured, the national postal service remains far ahead of its competitors. Holding the majority of the market with its delivery of 4 billion pieces per year, Poczta is estimated to face privatisation no earlier than in 2013. Like other public sectors, it is afraid that rapid liberalisation would result in weaker customer service and huge job losses. Another advantage for Poczta is that it delivers everywhere, regardless of whether it is profitable, while competitors stick to larger, urban towns to secure their business.

Considering the problems Poczta Polska has confronted in the past, the growth in popularity of independent courier companies is unsurprising. Its inefficiency has not only led to businesses losing sales as a result of products not being delivered on time, such as internet stores and auction sites who rely on the distribution of orders, invoices and deliveries, but has also affected the courts and other important establishments, which post notices via registered mail. There are regular cases of clients not receiving bills in time, often resulting in undeserved late fees from phone, electricity and gas companies.

In addition, a record amount of delays took place over the past Christmas, when there was tremendous pressure to sort and deliver thousands of presents and greeting cards. However, the Christmas traffic was not an exception. According to an examination carried out by UKE, less than 60 percent of priority parcels make it to the recipient on time.

Adam Ambrozik from the Polish Employers Confederation (KPP) states that the Solidarity trade union does not have the right to organise a strike, as it cannot solely represent all parties to the employee position. KPP also expresses doubt over whether due process leading to the strike was observed, since negotiation and mediation are necessary prior steps.

Whatever the outcome, Poczta Polska will need to undergo a series of changes in order to adjust to the expectations of its workers, customers, managers and competitors. If the climate of conflict surrounding the potential strike is any indication, some degree of commercial restructuring is inevitable.