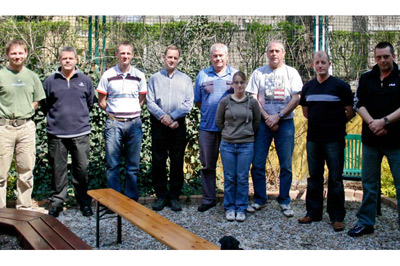 This April saw some unlikely exchange students come to town: nine British police officers from the Avon and Somerset Constabulary spent two weeks in Krakow learning the Polish language and customs to take back with them to England. The officers stayed with Polish families as they brushed up on their Polish in classes, toured Krakow and the surrounding areas, and met with their Polish counterparts to discuss how to achieve better cooperation between the two police forces.

The trip was prompted by a visit from two Polish police officers to the Avon and Somerset area, which includes the major cities of Bristol and Bath and has an overall population of about 1.5 million. The Polish police were initially invited by Inspector Mark Evans, who led the return visit to Krakow. Speaking to the Krakow Post Inspector Evans described the situation in England: “We have 50,000 Polish people in our area, and we need to be able to communicate properly with our Polish community. We recognize that we need to be taking steps forward to start speaking to them and helping them to understand our laws and customs.”

In the UK, the main need to communicate occurs when Poles get behind the wheel. Whilst in Poland the alcohol limit for drivers is actually considerably stricter than in the UK (0.2g and 0.8g of alcohol per litre of blood respectively), the reality is that drink driving is more accepted by Poles than by the English, who have shaped up their act over the last ten or fifteen years in response to high profile public awareness campaigns. Being able to convey the laws in England more clearly to the Polish community could solve part of that problem.

In instances where it is members of the Polish community who are the victims of crime, Inspector Evans would like them to know that the British police are approachable, and stresses the differences in the two countries’ forces: “[Polish police] have an authority that they’d like to keep. So if you walk in the street it?s very hard to speak to a Polish police officer. If you look at Britain, you can speak to any police officer and they will speak back to you. There?s quite a difference in how we police.”

Inspector Evans described the exchange experience as a learning process for both sides: “We need to learn from Polish police how to put more discipline back into our force, but also I think the police service here could learn from us in how we communicate with people.”

In Poland, one of the main problems the officers would like to address is the persistent menace of British stag parties. The officers discussed setting up a system in cooperation with the Polish police of placing officers in airports in the UK, to warn Polish officers of the numbers and identifies of incoming stag groups. The Polish police would in turn give information on those travellers who broke any laws in Poland, so punishment can be dealt out upon their return, breaking the existing cycle of non-consequential actions perpetrated outside their home country.

Inspector Evans hopes that this trip is just the beginning of further cooperation between the police forces of both countries, and could even provide a template for policing future immigrant communities. “By us coming here to start to learn Polish, we hope that they [England’s Polish community] will see that we?re making an effort, and they will likewise make an effort with us,” stated Inspector Evans.