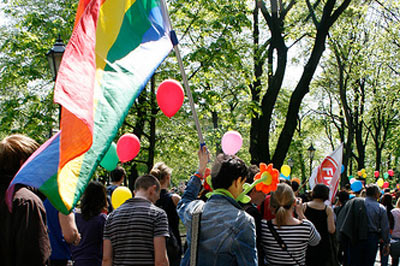 This year Krakow’s Culture for Tolerance Festival celebrated its fifth anniversary with film showings, art exhibitions, workshops, discussions, and the fourth annual Tolerance March. For the first time in its four-year history, the march succeeded in reaching the Main Market Square and was not forced to alter its track due to interference from counter-demonstrations by groups of far-right extremists. The marchers were, however, threatened by the participants of an illegal demonstration of skinheads and ultra-nationalists who threw eggs and bottles at the peaceful march. The counterdemonstration, organized by Narodowe Odrodzenie Polski (NOP), gathered on the Market Square around the statue of Adam Mickiewicz. No one was injured, due to the presence of a few hundred policemen, though six members of the illegal demonstration were arrested.

Earlier, members of the All Polish Youth also held a counterdemonstration; their message, “Three Steps,” focused on the elimination and delegalization of LGBT marches and parades, same sex marriage, and homosexual adoption. Majka Sokal, one of the organizers of the Tolerance March, stated, “I was so pleased that we were able to reach the square without having to be stopped by a bunch of hooligans. I think it shows that the situation for LGBT people in Krakow is somewhat improving.”

At the beginning of the march on Matejki Square, three local LGBT and queer groups (Culture for Tolerance Foundation, Campaign Against Homophobia, and Love Without Borders) read statements of support, while members of Culture for Tolerance laid flowers by the Tomb of the Unknown Soldier. Stated Igor Wenc of Love Without Borders, “We are fighting because we have something to fight for, we are fighting with love, because we know what love really is. We come out of the closet and face rejection and violence just to love each other.”

This year’s Culture for Tolerance Festival focused on the theme of “Sexuality, Radicalism, and Revolution” and featured exhibitions and films of artists from all over Europe, and also served as an opportunity for local artists to display their work. The festival kicked off with the opening of the photography exhibition “Ecce Homo” and a meeting with its creators, Yves De Brabander and DAve SChweitzer from Belgium, in Pauza Gallery. Local artists Lidia Krawczyk and Wojciech Kubiak also exhibited a selection of their paintings from the cycle, “Gender Queer” at the Open Studio in Kazimierz. The opening served as the much-awaited European premier of the artists? paintings, which question the ways in which perceptions of gender are dictated by social norms and expectations. The festival?s third exhibition, featuring a collection of pictures entitled “Cumfaces” (Stuart Sanford, Great Britain) opened in Miejsce on Saturday.

The festival also featured the Polish premier of Bruce LaBruce?s newest film, Otto; or Up with Dead People (Germany, 2008) about a teenage zombie who tries to make sense of the world of the living. The film had previously been shown only at the Sundance Film Festival and the Berlinale. The closing of the festival on Sunday also saw the premier of the first Polish documentary film about transsexuality, Trans-mission (Poland, 2008) and a meeting with the film?s directors Justyna Struzik and Julie Land as well as the protagonist, Konstanty Wilk. “We were really pleased that so many people were interested in the film, and we hope that in the future there will be more films that touch on LGBT issues in Poland,” noted Struzik. The film portrays the Kafkaesque struggle of the protagonist, a female to male transsexual, as he tries to obtain identity documents that would allow him to normally function in Polish society.

During the festival, as every year, a cycle of meetings and discussions, entitled “Queer Café” took place in various bars and cafés throughout the city. Topics of discussion included: homosexuality in the history of Polish Literature, queer anarchism, homosexuality and Polish Theatre, androgyny in popular culture, architecture and gender, as well as conversations about the LGBT movement in Poland and the five-year history of the Culture for Tolerance festival itself.

Sokal stated that she was, “pleased with the festival; the attendance rate, the march, the discussions that took place, the parties, everything.” She added that she hopes that the festival “will continue to grow in the next five years, as it has for the last five.”