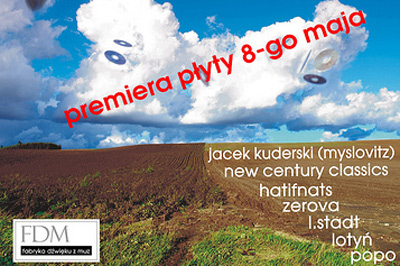 Compared to countries like the United States or the UK, Poland’s independent/alternative music scene seems incredibly limited. While across the Atlantic or the English Channel whole communities of musicians and fans exist devoted to such obscure genres as fantasy metal or electro-folk, in Poland a year or two ago the best we could hope for was a Polish copy of a popular underground British band making yet another appearance at the one club that would have them. But quickly things are changing; thanks to the rising popularity in Poland of music-promoting sites like Myspace.com, MegaTotal.pl, and last.fm, Polish artists who don?t fit the RMF-FM mould are reaching their audiences before they even set foot on a stage. And so begins the paradigm shift.

If you look at the States or UK, the staples of a good alternative music scene are the independent labels that promote these little-known artists. While the major labels focus on pop, profit, and multi-million dollar music videos, it?s the independent labels that are left to focus on the most often-ignored criteria in today?s popular music: talent. Picking out the rough gems from amongst the rubble, they provide these under-resourced artists with the materials and means needed to reach their audiences: studio recordings, pressing records, press attention and concerts. Such an institution had been sadly missing from the world of Polish music for most of its history.

There is in fact an example of an independent alternative label operating in Poland, albeit a short-lived one. Between 2001 and 2004, Sissy Records, led by Pawel “U-Zek” Jozwicki, released a number of important Polish underground bands, a few of which have gone on to sign to other labels, including Scianka, Novika, Old Time Radio, Cool Kids of Death, Smolik, Futro, Homosapiens, and Lenny Valentino. Their collapse in 2004 left a gaping hole in the alternative market, with no one scouting out the new talent that was unfolding. In late 2007, a record label was established to fill that gap. Founded by Robert Kaluza, Fabryka Dzwieku z Muz (FDM) began as simply a recording studio, but Kaluza quickly realized that Poland?s young independent artists needed a label just for them. The name, roughly translated as “Factory of Sound from the Muses,” comes from the idea of major labels existing as profit factories, pressing nicely packaged plastic on the young generation and ignoring underground or unknown bands; FDM is also a factory, but the products of this particular enterprise promise to be inspired by artistic integrity.

The record label has signed seven artists so far, all Polish: Jacek Kuderski, Hatifnats, New Century Classics, Zerova, Lotyn, Popo, and L.Stadt. The bands’ sounds vary from the new rave synth pop of Popo to the Icelandic-inspired ambient sounds of Zerova to the instrumental post-rock of Cracovians New Century Classics. Hatifnats and L.Stadt take inspiration from the UK and US indie scenes, while Kuderski, bassist of Polish rock legends Myslovitz, and Lotyn, Kaluza?s own band, play more guitar-heavy melodic rock.

FDM’s first release will be a 14-track compilation titled “W krainie dzwiekow z muz” (“In the Land of Sounds from the Muses”). The compilation features two tracks from each of the seven artists signed to the label, and will be released in the second week of May, accompanied by a promotional tour around Poland by the signed artists. Later in the year, FDM will produce full-length albums by each of the artists. Keep your ears peeled for great things to be forged in this factory.