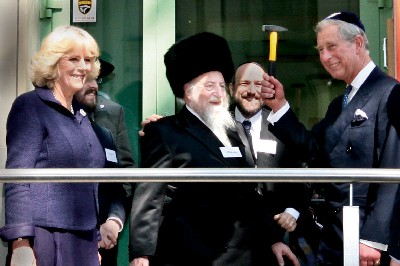 Pulling up amid a sea of reporters, photojournalists and digital camera-wielding tourists, the Prince of Wales and the Duchess of Cornwall alighted at the foot of St. Mary’s Basilica, their first stop on a day-long tour of Krakow. The Royal couple also visited the Sukiennice and Wawel Castle, but their main purpose lay in Kazimierz, the historic Jewish district. The Prince was here to open the Jewish Community Centre (JCC), a £700,000 project that has been launched largely thanks to his patronage.

As heir to the British throne, Prince Charles is destined to inherit the ancient title – ‘Defender of the Faith.’ However, for many years he has cultivated a broader role, considering himself a ‘Defender of the Faiths.’ He is involved in several projects that respect the dignity of various religious communities and creeds. During his last visit to Krakow in 2002 the Prince met with Ryszard Orowski and other Holocaust survivors, and learnt of the need for a place where members of the Krakow Jewish community could gather. Upon his return to the UK he contacted the World Jewish Relief (WJR), a London-based charity founded in 1933 that helps to fulfil the needs of Jewish communities throughout the world. In what he called his ‘interference,’ the Prince of Wales has provided the Jewish community of Krakow with a gathering point that now bears his name.

Speaking before Prince Charles in the unveiling ceremony, Orowski expressed his gratitude to the Prince: “Never did we imagine that we would have a centre, a home, for the whole community of Krakow. Many think this community was entirely devastated by the Nazis but there is such life here still.” Present at the opening ceremony were many prominent members of the Jewish community, not only from Poland but from around the world, including Rabbi Michael Schudrich, the Chief Rabbi of Poland, and Rabbi Edgar Gluck, the Chief Rabbi of Galicia.
The revival of Krakow’s Jewish community is poignant in a city that in living memory provided a home to some 60,000 Jews. The Holocaust devastated Krakow’s Jewish community. Many of the few who survived the war moved abroad to the West, mainly to the United States and Israel. Some left due to outbreaks of anti-semitism in the aftermath of the war. Surviving Jewish children were often raised Catholic so as to fit in with the greater populace, leading to the strange phenomenon today of Poles discovering their Jewish heritage for the first time in their senior years.

And yet, a revival is underway, and the opening of the JCC is a major landmark. A promising sign came in 2005, when Krakow received its first full-time rabbi since the Holocaust, Avraham Flaks. The district of Kazimierz has itself been steadily renewed over the past few years, but although it is referred to as a historic ‘centre of Jewish culture’, spotting actual Jews, aside from American-Jewish and Israeli tourists, has been up to this point a rare event. The annual Jewish Culture Festival attracts more non-Jews than Jews, creating the phenomenon of a Jewish revival without any Jews.

However, hope lies in the future. Amongst the many visitors to the JCC on its opening day was a group of children, the first to use the centre’s educational facilities. The Prince of Wales Community Centre can be used by about 1,000 people and is intended to host social, educational, and religious functions, as well as exhibitions in its multi-purpose rooms. It also includes a day care for the elderly, computer facilities and an Internet caf?. The whole centre takes up three and a half floors next door to the Tempel Synagogue on Miodowa Street.

At present, there are about 300 registered members according to Tadeusz Jakubowicz, president of the Krakow Jewish community, and yet some estimate there might be a few thousand, many of whom simply don’t know about or are vague about their heritage. And as about 70 percent of the world’s Jews can trace their roots back to Polish soil, it would be no surprise if some of them decided to return in the near future, making the presence of a gathering point essential. Jonathan Orstein, director of the new centre, said the centre’s priority for the near future lies in “setting up the necessary infrastructure to begin to fulfil the needs of the community.”

One thought on “A Royal Return”