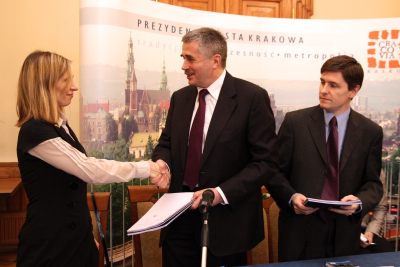 Krakow is rapidly becoming an attractive place for international businesses to open or expand offices, especially technology and accounting companies. In fact, so many tech companies are moving in or adding facilities that some local officials are dubbing the Krakow area the tech capital of Poland. The surge in international companies’ interest in locating in Krakow has led to a boom in office-building construction. IBM and Accounting Plaza caused excitement in the business community recently by announcing they would expand their activities in Krakow. They signed leases with Globe Trade Center S.A. on Feb. 21 for a lot more office space. IBM will now lease 14,000 square meters in three office buildings, a 21-percent increase from the 11,000 square meters it had been using. It employs about 1,600 people in the area. Accounting Plaza will lease about 3,000 square meters, a 66-percent increase from the 2,000 meters it had been using. It employs about 350 people. The leased space will be in Globe Trade Center?s three-building Aleja Armii Krajowej office complex.

Other tech companies that are in Krakow include Google, HCL Technologies, UBS, Electric 80 and Motorola. In addition, the popular Polish Internet portals Onet and Interia have their home here. And CapGemini, Philip Morris and Shell are among companies that have located outsourcing offices here. Krakow Mayor Jacek Majchrowski sees the IBM and Accounting Plaza decisions as additional evidence of the wisdom of the city’s decision to promote the academic prowess of the area as a way to attract high-tech and business-service companies.

Krakow has some of the best universities in Poland. Majchrowski noted that in 2002 Krakow had only one top-flight office building whereas today it boasts several buildings that together offer more than 260,000 square meters of space. In fact, Krakow is second only to Warsaw in the amount of new office space available, according to the consulting company CB, which monitors the real-estate market. The demand for office space has led to a jump in the number of office developers in the Krakow area. Analysts project over 15 new office buildings opening by the end of 2009.

Krakow residents can expect to see new office buildings popping up in all districts except Old Town, according to city officials. Globe Trade Center S.A. is a prime example of a developer not limiting itself to the market in Krakow, but expanding ianto other regions of Poland. Globe Trade Center, the company witha whom IBM and Accounting Plaza signed the leases last month, plans to add two more buildings to its array in the area. It already boasts the Galileo, Newton and Edison buildings in its Aleja Armii Krajowej complex. It will add a Pascal building there as well. And it will construct a building in the Galeria Kazimierz area. The availability of new office space is not the only incentive for international companies to come to Krakow. John Lyons of Krakow’s IBM operation said the area also has a strong economy, a progressive business environment and good infrastructure. Then there is the skilled workforce, especially engineers and accountants. Anna Pankau of Accounting Plaza told Gazeta Wyborcza that one reason the company chose Krakow was because its universities are producing talented accounting graduates. The graduates it has hired showed Krakow was a wise chose, she said.