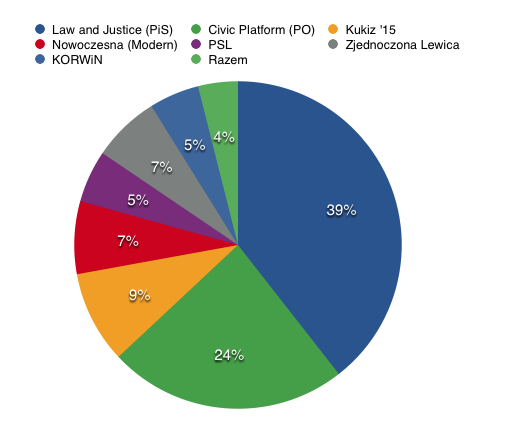 The conservative Law and Justice (Prawo i Sprawiedliwość, PiS) won a resounding victory in the Polish parliamentary elections, not only regaining power after 8 years in the minority under a Civic Platform (Platforma Obywatelska, PO) – led government but also becoming the first party since Poland regained democracy in 1989 to achieve a majority without needing to form a coalition.

Gazeta Wyborcza is reporting that PiS netted 39.12% of the vote, with PO at only 23.41%. In another historic change, the Democratic Left Alliance (Sojusz Lewicy Demokratycznej, SLD), which had formed a coalition with other liberal factions, failed to win any seats at all for the first time.

With Beata Szydło replacing Ewa Kopacz as prime minister, PiS will have a lock on both the executive and legislature, a position it has says it may use to change the constitution as well as reverse some unpopular changes PO made, such as their raising of the retirement age.

The movement led by rock star-turned-presidential candidate Paweł Kukiz has come in third. Exit polls currently put right-leaning maverick Janusz Korwin-Mikke’s eponymous party at 4.9%, on the cusp of the 5% required to gain seats in the Parliament, with fledgling liberal party Together (Razem) came in at 3.9%, qualifying them for national funding.