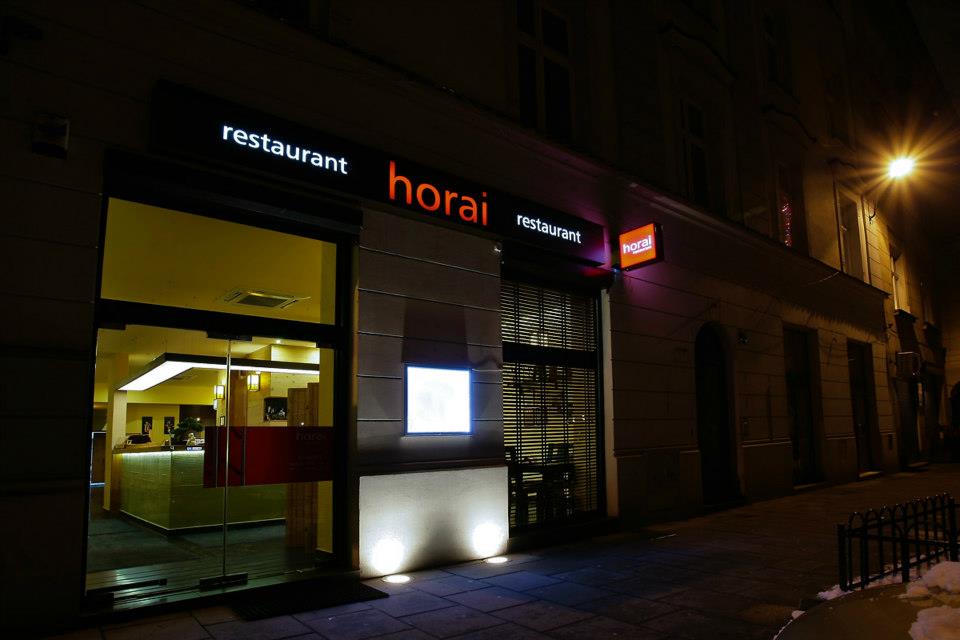 The Asian food explosion in Krakow that began in earnest about three or four years ago has been well-documented, not least in this column by yours truly. And I am a huge fan of this development, having lived through the dark days in this city in the early 2000s when, if you wanted Asian food, you had to consign yourself to one of the many dingy ‘Vietnamese-Chinese’ places scattered around Krakow’s backstreets and suburbs. MSG-packed meals of variable quality but at milk-bar prices were served by disinterested staff in chilly premises, and they were oddly popular—so much so that many of these stalwarts still stubbornly survive today. 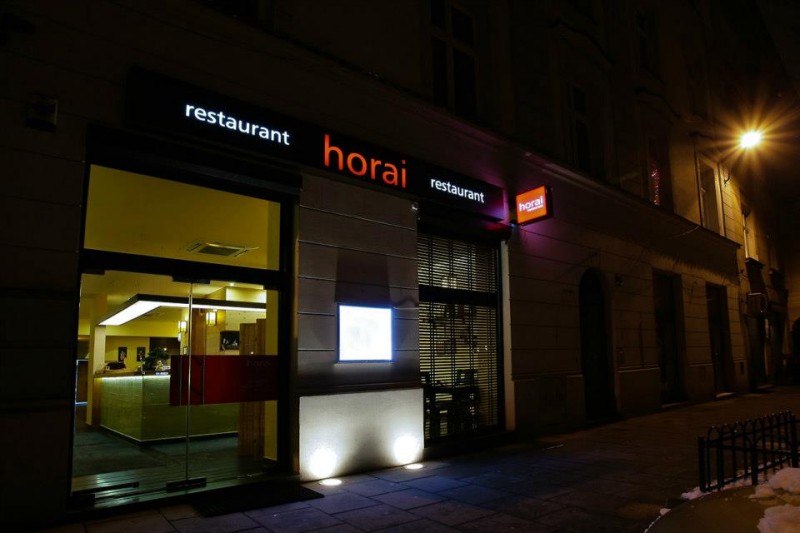 Luckily, Horai (‘Paradise’ in Japanese) opened in 2005, and things started to look up. It was an instant hit, providing the first real Thai curries, noodle dishes, and (good) sushi in the city at modest prices and in comfortable surrounds. Since then, competition has come and gone, the hipsters have moved on, and Horai has moved premises (albeit only to the other side of Plac Wolnica)—and yet it stays steadfastly to its blueprint of providing pan-Asian food at affordable prices. As a resident of this area, I decided it was time to revisit the place and check out whether it is still cutting the mustard (or chili).

The first thing you notice when you enter Horai is the laid-back feel of the place. Tastefully-lit tables with varnished wooden dividers between them and carefully-placed photos on the wall of scenes in southeast Asia set the right tone, and the music is relaxing. A couple of Zen-like sushi masters prepare their wares in view of the customer, and the fresh seafood, salmon, and tuna are on display, to forego, presumably, the oft-made claim of places like this not selling fresh fish.

The sushi selection is extensive. In fact the menu in general is bewilderingly long and unwieldy, something that these days seems to have become a complete restaurant no-no. I’m not quite sure why this is; maybe people don’t like too much choice anymore in these days of mass dumbing down. I’m pretty sure it has something to do with Gordon Ramsey—or Magda Gessler, if you prefer. I have found over the years that this is not a drawback in Horai, because I have yet to come across a dish that I’ve been genuinely disappointed with. Suffice to say that your strategy in Horai should probably be to know roughly what you want before you enter—Japanese in the form of sushi, ramen or tempura, Thai in the form of Pad Thai, various curries and other rice/noodle dishes; Chinese, Indonesian and even Korean form the majority of the rest of the menu. My one criticism here is that there could be better signposting in the menu as to where all the dishes actually originate. 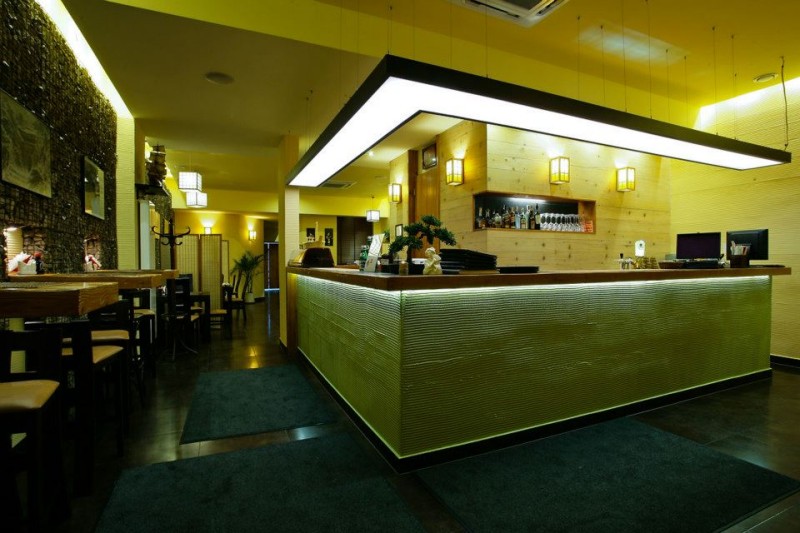 I ordered a beer (Tyskie, 8zł) and noticed there were a few Japanese beers available in small bottles for about 12 zł. A long-time visitor to this restaurant, I am au-fait with the fact that, if you ask nicely, you will be given a basket of crab-flavoured crackers with spicy sate sauce for free as an entree—a nice touch. It’s not on the menu though, so mum’s the word. Oh, and they are very good indeed.

I decided to have some sushi as a starter. I ordered a nigiri set of six which comprised of salmon, flatfish, sweet fried tofu and butterfish (30zł and six uramaki kalifornia—crabstick, avocado and mayonnaise (28 zł). I’ve never had bad sushi here, and the portions are always pretty good—delicious, sizeable chunks of nutritious rice and fish. The lightly heated karifornia were particularly good.

Next, I tried a Thai galangal soup—Thom Ka Gai. This is one of my favourite soups in any cuisine, and when done well, it can literally alter your state of mind—especially in the depths of winter when it can be a real pick-me-up. Luckily, here it is. Simultaneously sweet, sour, salty, and savoury, it contains chicken, shallots, lemongrass, ginger, and coconut milk, amongst other things, and is a thing of wonder. At 18zł, it’s perhaps pricey for soup, but believe me when I say it’s worth it. 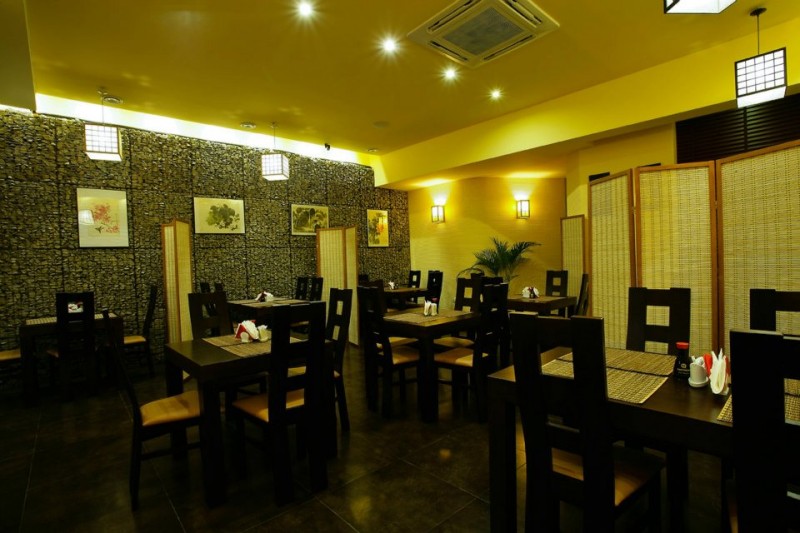 Moving on to the main course, my default in this restaurant is usually a Thai curry—creamy and spicy—or the barbecued ribs, which slide off the bone and come with a sweet Chinese sauce. I decided to try the Bami Goreng this time, as I hadn’t had it for a while. An Indonesian dish comprised of thick stir-fried bami noodles, chicken, beef squid rings, and king prawns with mushrooms, peppers and green beans, it comes in a large bowl and is deliciously seasoned with sweet soy sauce and garnished with crushed peanuts. Priced at 28zł, it represents great value—I’ve had to take my leftovers home in the past. I am happy to report that this remains one of the best tasting and best value dishes in Horai, and it makes me wonder why the chef doesn’t try his hand at other Indonesian cuisine like beef rendang—Krakow lacks an Indonesian or Malaysian restaurant of any type, and as far as I know this is the only place in town where you can get a dish from that part of Asia. My partner had tempura—deep fried fish, seafood and vegetables with an interesting green tea powder dip. It was crispy and there was plenty of it—she also couldn’t finish it.

I didn’t have a dessert. It’s a waste of time usually, unless you have a craving for deep-fried banana or something unidentifiable and green in a small bowl; this reflects Asian cuisine well in my experience, where soups and main courses form the mainstay of diets and sweet food other than fruit is notable by its absence. I just had another beer and reflected that this is still the daddy of Asian restaurants in Krakow, and the benchmark to which others must aspire. It ticks all the boxes—choice, quality, portions, price—and does it all without too much fuss. For me there is no higher recommendation.

3 thoughts on “Drop In: Horai Restaurant”