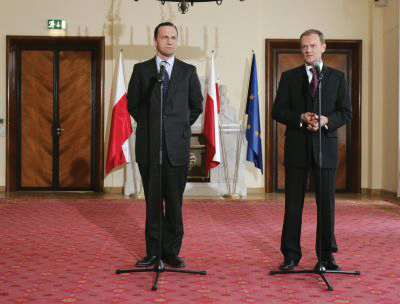 Just 10 days before Prime Minister Donald Tusk visits the U.S., no agreement has been reached on a U.S. proposal to put an anti-missile shield in Poland.

A sticking point is that Warsaw is seeking a $20-bln long-term military modernization package in return for allowing the U.S. to base Patriot missiles on Polish soil.

Poland called off negotiations scheduled for Feb. 22, the daily newspaper Gazeta Wyborcza reported. But Slawomir Nowak, a senior Tusk aide, said that doesn’t mean there is a deadlock in the talks.

“The talks with our American friends are aimed at reaching a form of agreement that is mutually advantageous,” he said. “The negotiations are going ahead as normal and I wouldn’t panic.”
Despite Nowak’s public pronouncement to the contrary, Gazeta Wyborcza said Poland is unhappy with the talks.

The U.S. apparently thinks $20 bln is too much to pay for permission to base missiles in Poland.

Gazeta Wyborcza said Tusk hopes the U.S. will agree to all the Polish demands during his visit to Washington ? if not before. Many foreign policy experts have speculated that Tusk and U.S. President George Bush will sign a missile-shield deal during Tusk’s visit to Washington.

But on Polish radio, Radoslaw Sikorski said that no agreement could be signed on such a short visit because it would require a “negotiating marathon.”

From the viewpoint of domestic politics, Tusk can hold out for everything Poland wants on a deal.
That’s because slightly more than half of Poles ? 52 percent ? oppose putting a missile shield on Polish soil. Many say it would be good for the U.S., but not for Poland. Thirty-three percent of Poles want the shield, and 15 percent are undecided. With widespread opposition to the deal in Poland, Tusk need not compromise with Washington to try to ramp up his domestic support.

A U.S. diplomat who visited Krakow last year disagrees that a missile shield in Poland would benefit only the U.S.
Kenneth Hillas, deputy chief of mission at the U.S. Embassy in Warsaw, said the U.S. could build a missile defense system on U.S. soil that would protect its territory.
But that would leave Europe vulnerable, he said, and the defense of Europe is a U.S. priority.

The U.S. says the Ground-Based Midcourse System is aimed at warding off missile attacks from such “rogue states” as Iran and North Korea and from terrorist groups bent on using weapons of mass destruction. The Russians aren’t buying that, saying the missile system is aimed at them and the radar portion of it could be used to keep an eye on Russian air movements. It has rattled sabers at Washington, Warsaw and Prague over the shield.
“Russia has to adjust its military strategies if the U.S. deploys missile defense systems in Eastern Europe,” Russian Defense Minister Anatoly Serdyukov has said.

“The deployment of a U.S. missile shield in Eastern Europe will aggravate tensions across the region and jeopardize the global strategic balance,” Serdyukov said in an article published on the web site of the Moscow newspaper Moskovskiy Komsomolets.
In June 2007, Russia proposed that rather than building a radar site in the Czech Republic, the U.S. use a Russian-rented radar site in Azerbaijan as part of a missile defense system. Azerbaijan shares a border with Iran, one of the “rogue states” Washington said it fears could launch missiles at Europe.

Washington declined the Russian offer, however.
“If Poland opts out of an anti-missile shield, it will lose the position of U.S. partner in this and many others ventures of the superpower,” said Piotr Babiarz, who is getting a doctorate degree in political science at Cardinal Stefan Wyszynski University in Warsaw. If the reason for opting out were to appease Russia, “it would be, for sure, a mistake,” he said.
“Russia appreciates only those countries which have a strong international position and good relations with strategic countries,” Babiarz said. As long as Poland is considering a missile shield, both the U.S. and Russia will court it, he said.
If Poland opts out of the anti-missile shield, he said, “we will deprive ourselves of an important trump card in international policy.”